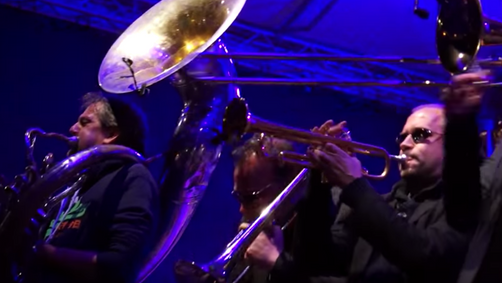 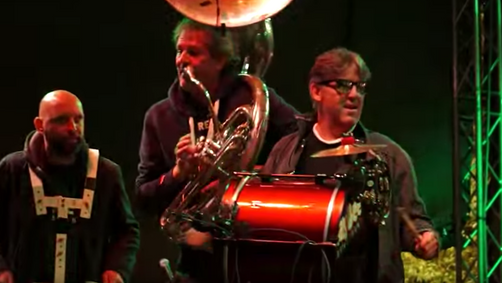 An 8-piece brass band, consisting of a mix of New-Orleans-specialized players and jazz musicians, with a more funky background.

This makes the Jay-Dee Brassband capable of playing traditional New Orleans music, as well as more funky jazz themes. And besides that, there are some compositions of their own added to their repertoire.

A brass band of the highest musical level with great soloists in every section and an extremely groovy rhythm section. And on top of all, JayDee Brassband brings a contagious enthusiasm with it, which draws the attention of every kind of crowd and puts a smile on everybody’s face.

JayDee was founded in 2010, by trumpet-buddies

Joep Habraken and Daan Bogers. In their first year, they were already invited to prestigieus jazzfestivals such as AsconaJazz and The Hague Jazzfestival. In 2011, the band performed at many festivals through Europe (Ireland, Germany, Switzerland, Holland).  In 2012 JayDee made their début on stage at the famous North Sea Jazz Festival. At that time, JayDee Brassband was considered to be one of the leading jazzbrassbands in Europe.

More than once, the band became one of the audiences favourite festivalbands. Beside the impressive quality of the musicians, the JayDee as a group has a unique ‘chemistry’ and power.

"The success of the Dutch eight-man band JayDee Brassband extends far across the borders of the Netherlands. Founded by trumpeters and friends Joep Habraken and Daan Bogers, the band blends traditional New Orleans music with funky jazz sounds. In the year the band was formed (2010), they were already invited to perform at large festivals at home and abroad and in 2011 the list of invitations grew longer. In 2012 the band is happily following this path and their debut performance at the North Sea Jazz Festival is a highlight in their appointment book. The JayDee Brassband is now considered to be one of Europe's best brass bands. Their concerts in the Netherlands and elsewhere always attract an enthusiastic, dancing audience, elicit exuberant responses and leave behind impressions of the wonderful city in which all the world's brass bands have their roots, New Orleans."

A varios bunch of strange guys.